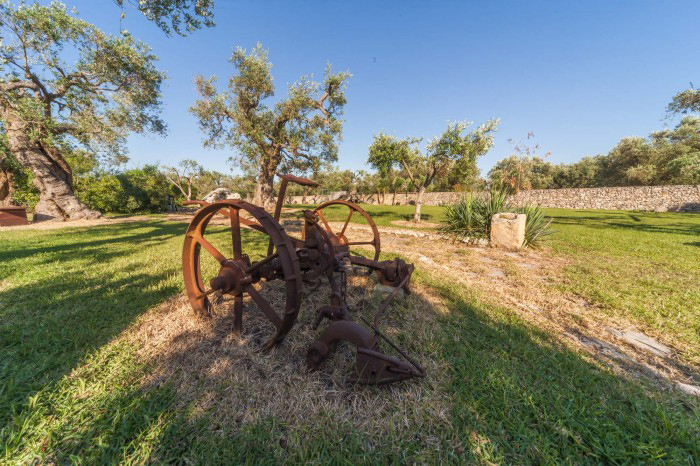 The Alti Pareti Masseria is set in the countryside close to Palmariggi, a small village in southern Salento. The narrow Salento peninsula, at the far south of Apulia, is kissed by two seas, the Ionian and the Adriatic. It is also home to Otranto, Italy’s most easterly point, and custodian of priceless cultural and historical treasures and since time immemorial meeting point between West and East. In fact the Salento was once known as the Land of Otranto.

At first sight it is a flat land, with no mountains, lakes or rivers. And yet visitors from the north are struck by its luxuriance. This is the home to vineyards, rich Mediterranean vegetation, fig trees, prickly pears that grow spontaneously, almond trees, expanses of poppies, oaks and the many typically Mediterranean and oriental vegetable species that are only found in this corner of Italy. The moving beauty of its coasts and, most of all, the seemingly infinite succession of mainly secular and even millenary, olive trees, which are veritable tutelary deities of not only the Salento but the whole of the Mediterranean: they are symbols of peace, spirituality and the meeting between earth and sky.
The red of the Salento earth forms the unique background to this splendid panorama. Its striking colour is due to the high level of iron, which gives the vegetables, fruits and all the Salento products a unique flavour.

The countryside in between the forests of olive trees is indelibly marked by traces of rural culture, with the unmistakable dry stone walls that were used, and are still used, to divide the famer’s land and the pagghiare, ancient dry stone constructions used to store tools. The Salento landscape is also dotted with, inland, many fortified Masserias dating back to the seventeenth, eighteenth and nineteenth century, and on the coast, with lookout towers built over the centuries as a defence against pirates. The typically Mediterranean historical towns, such as Lecce, are dominated by the unique yellow-pinkish colour of Lecce stone. Its softness and malleability was perfectly suited for chiselling and was used to decorate the face of churches and buildings of rare richness and beauty. The internationally famous Lecce baroque style became very popular especially in the sixteenth and seventeenth centuries.

But Salento’s heritage does not stop there. This primitive land, once called Messapia (“Land between two seas”) and home to the Messapian people, has been culturally and socially modelled by the Greeks, Latin, Byzantine, Normans, Aragonese, Saracens and Bourbons. An accumulation of languages, traditions, religions and views of the world that have created an extraordinary heritage in the Salento, of which Otranto and Lecce, are two of the most significant centres, but certainly not only ones.

Agriculture, that in the Salento peninsula is not only a rural and rustic tradition but these days a veritable and advanced entrepreneurial activity, runs parallel to this rich heritage. The climate is typically Mediterranean and temperate. It enjoys the influence of the two seas with long and dry summers and mild winters and of the Balkans on the Adriatic side. The territory is mainly flat, especially the southern tip, and geologically calcareous and clayey. This unique alchemy is ideal for the cultivation of various products. First of all the sacred olive oil; there are millions of olive trees in the Salento alone, in particular the Cellina and Salento Ogliarola varieties. Then, naturally, vineyards. The typical varieties of the Salento peninsula reflect the strong character of this land: Negroamaro, Primitivo, Malvasia, etc. Over the decades the local growers have increased their wine-making knowledge and skills, so that today Salento’s wines are appreciated across the globe.

Alongside oil and wine, the noble standard bearers of a millenary culture, thanks to a land kissed by the sun and sea and with a unique morphology, the Salento boasts many other crops from vegetables (such as aubergines, peppers, courgettes, tomatoes) to many different types of figs and fruit. The nursery gardening is also a thriving business. This richness of flavours finds its way in Salento’s food and wine, which today brings together the rural and peasant tradition with a new modern approach.

By using the site, you accept the use of cookies on our part. more information